In September, we published an article North Macedonia for the first time in the ESS and the expectations that the National network has.

At the same time, it is also necessary to understand the environment that enabled the decision: the Ministry of Science and Education of North Macedonia will finance the ESS. We asked the Minister, Mrs. Mila Carovska, about the decision, the meaning and the future of ESS in North Macedonia. 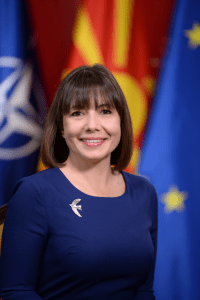 In all previous EC reports on the country’s progress in science and research (Chapter 3.25), the EC emphasizes the importance of strengthening research and innovation capacity in line with European Research Area (ERA) priorities. This means, in the first place, an increase in the level of investment in research, which has been stagnant for several years and is significantly below the EU average, around 0.4% of GDP, with a negligible but slight improvement in the share of the private sector, which is 0.1% of GDP.

The Ministry of Education and Science has been already working on planned and continuous provision of funds intended for science, through grant, project, and program funding.

This year, for the first time, the Fund for Innovation and Technological Development in cooperation with the Ministry of Education and Science through grant funding awarded 34 innovation vouchers worth MKD 15 million, which should encourage the development of science in our country. For 23 of the awarded applications, the “Ss. Cyril and Methodius” University – Skopje will provide the necessary services, 9 vouchers have been awarded to the “Goce Delchev” University – Shtip, and 2 to the “St. Clement of Ohrid” University – Bitola.

As of next year, the Ministry of Education and Science will introduce support for national research programs, while the expectations are that by 2022 program funding will be introduced, which will be implemented continuously and will be provided by a completely new Law on Scientific Research.

Considering that one of the key priorities of the European Research Area is to strengthen research infrastructures, the Ministry of Education and Science has started preparing a National Research Infrastructure Roadmap, in line with the ESFRI Roadmap, aimed at regional integration of the Republic of North Macedonia as one of the 6 countries in the Western Balkans, building and strengthening research capacities, strengthening research excellence, creating a research network and its connection with the European Research Area.

One of the activities in this context is the decision of the Ministry of Education and Science by which the Republic of North Macedonia became part of two large European research infrastructure consortia, such as: CESSDA ERIC (Consortium of European Social Science Data Archives) and European Social Survey ERIC (ESS ERIC). We expect that the European Social Survey that will be implemented in the Republic of North Macedonia will be recognized by the EC as a project that will contribute to the integration of our science in the European Research Area, while the social sciences will be one of the drivers of progress in the country.

Our country is seldom part of an international research that provides data comparable to other countries over a long period of time, which makes the European Social Survey particularly important and useful.

Namely, the European Social Survey will create a comparative framework for comparing the attitudes of the population in North Macedonia with those of the population of other European countries and so will allow us to see how we currently stand in relation to the region, or the entire continent.

The research design involves collecting data every two years, so that it is possible to follow trends and see if there is improvement or deterioration in the researched areas.

Through this infrastructure, there will be cooperation with colleagues from abroad who will transfer theoretical and methodological knowledge, as well as new technologies in science. Also, the fact that the national consortium for the European Social Research consists of: the Institute for Sociological, Political and Juridical Research (ISPJR), the Faculty of Philosophy of “Ss. Cyril and Methodius” University – Skopje, the “St. Clement of Ohrid” University – Bitola, the State University in Tetovo, the University of Southeast Europe – Tetovo, the “Goce Delchev” University – Shtip, FON University – Skopje and the University American College – Skopje, is a clear indication that this research will help connect domestic institutions and social scientists.

Finally, the European Social Survey data will contribute to the acquisition of knowledge of conditions, attitudes and trends in a number of areas, including relevant topics from a variety of disciplines (law, political science, sociology, etc.). State institutions will be able to obtain data that can be used to assess the situation in various policy areas and take steps to create public policies that are more appropriate.

Based on the experience of many years of participation in this project of many more developed countries than ours is, the Ministry of Education and Science plans to follow their example and will continue to participate in other waves of this research.

This text was written by Klime Babunski

The Institute of Social Science in Belgrade is a coordinator of the Western Balkans European Social Survey Regional Network project.

This project has received funding from the European Union’s Horizon 2020 research and innovation programme under grant agreement No 871063.